Ashfield Land is celebrating the success of Sinclair Retail Park, its new retail development at Four Pools in Evesham with Aldi, TK Maxx and Home Bargains all now trading. 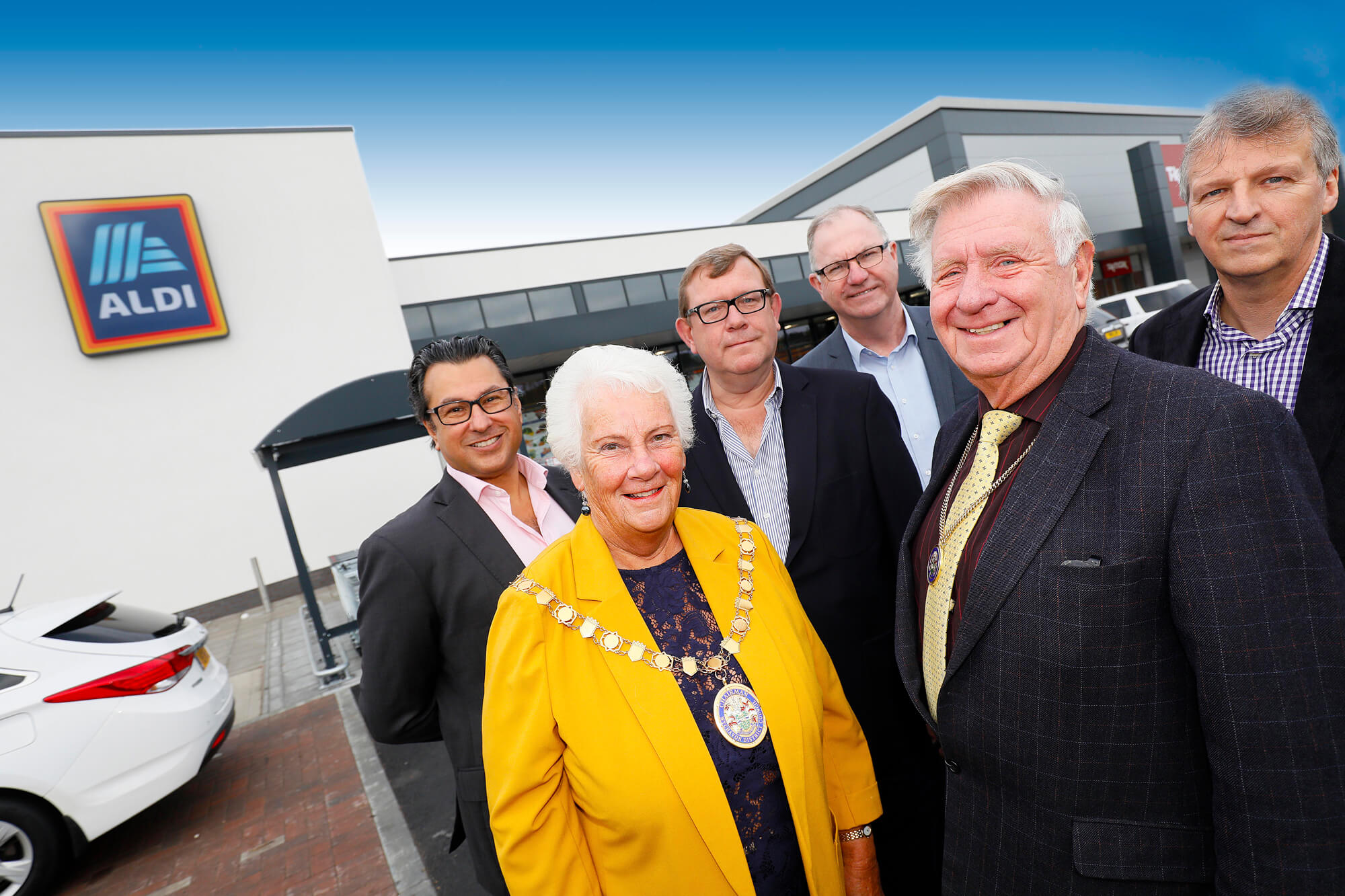 Ashfield Land managed a full and end-to-end transformation of the site and, along with Worcestershire based Benniman Construction, the old buildings were demolished and the new development has now been successfully delivered. The 42,000 sq ft scheme was fully let prior to construction.

Robert Birch and Paul Jagroop of Ashfield Land were on site this week (15 October) with Chairman of Wychavon District Council, Cllr Frances Smith, as well as Sean Sinclair of RST and Kevin Zamur of Benniman Construction to celebrate the completion of the project.

Robert Birch, Lead Director at Ashfield Land, said: “Sinclair Retail Park is a story of transformation in every sense. A long-established family business has relocated to a new site where it can grow and we’ve redeveloped the old site into a new retail destination. There’s no doubt it’s a success story and I’m proud to have played a part.”

Cllr Frances Smith said: “Ashfield Land has done a fantastic job and the site at Sinclair Retail Park speaks for itself. It’s a great scheme which is delivering jobs and economic benefits in Evesham. I am particularly pleased that Ashfield has been able to pay for and install a much needed new pedestrian crossing on Davies Road. I am sure the late Mr Ron Sinclair would be proud of what has been achieved on the site which for many years housed his transport business.”

Sean Sinclair of RST said: “The Sinclair family is immensely pleased to see Sinclair Retail Park open and thriving and it was very nice to hear of the decision to give the new development our family name. We’ve enjoyed running our business in Evesham for 50 years and Four Pools was our home since 1983. Now we have a bright future at our new home at Vale Park which we are looking forward to tremendously.”

The new retailers on site have all been opening there within the last few weeks. Aldi opened on 3rd October, Home Bargains on 28th September and TK Maxx on 26thSeptember.

Ashfield Land has sold the freehold interest to LXi REIT.

Sinclair Retail Park is a 42,000 sq ft retail development on Davies Road. It was 100% pre-let prior to construction.

Sinclair Retail Park supports approximately 115 new full and part time job opportunities, in addition to the jobs that were created during construction.

Wider benefits and improvements created by the scheme include the financing and delivery a much needed and long awaited pedestrian crossing on Davies Road.